This week was Mathletics week which meant our Olympic Mathletes were at the school. 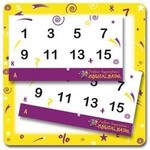 We had a parachute, some beach balls and even some football fun. It was an unbelievable week! This week everything was sports related as we took our maths adventures to a whole new level! Our Olympic Mathletes came dressed in their sports gear...here's what the children did. In KS1, first they began with parachute games! They held the edges of a giant parachute and played lots of different maths games. The first is numbering the children with certain numbers (these can be small if we want an easier game, or larger for a harder game). We then ask the group questions, and if your number is the answer you must run under the parachute to the other side! We then add in large foamy dice to make things more interesting, and play a 'number patterns' game where we number the children in a pattern, they close their eyes while one child goes under the parachute, and when they open them they decide as a group which number is missing. In KS2's club, he children stood in a circle while a giant beach ball was thrown into the air. Children had to catch it, and then see where their thumbs landed on the ball. There were different numbered regions on the ball, so the activity leader then shouted an instruction and the child had to answer it. It could be as simple as "add your numbers together" or, it could be harder "multiply your numbers together, and subtract the number of legs on a cow" or, perhaps "subtract your numbers, and name a shape with that many sides"
© 2022 Platt Bridge Community School.
Our school website is created using School Jotter, a Webanywhere product. [Administer Site]